A recent publication co-authored by Dr. Holy Rabenantoandro, head of Lymphatic Filariasis Elimination program at the Ministry of Health, and PIVOT researcher Dr. Andres Garchitorena presents results that could have implications on international guidelines for surveillance of lymphatic filariasis (LF), a neglected tropical disease commonly known as elephantiasis. Published in PLOS Neglected Tropical Diseases, the study is entitled Toward elimination of lymphatic filariasis in southeastern Madagascar: Successes and challenges for interrupting transmission (read the full paper HERE).

In Madagascar, LF is treated through mass drug administration (MDA), delivered to children by teachers at schools and to adults by community health workers going door-to-door. The new study’s results suggest that the evaluations of LF programs recommended by the World Health Organization (WHO) may be insufficient. Whereas current evaluations focus only on school-enrolled children, they may fail to capture the burden of disease on adults, among whom LF prevalence is often higher due to the weaknesses of community MDA delivery systems.

LF is caused by a parasite carried and spread by mosquitoes. Though highly treatable with low-cost medicines, LF can be debilitating when left untreated, causing painful swelling in the limbs and genitals, and thickening or hardening of skin and tissue. Approximately 18 million people in Madagascar are at risk of acquiring LF each year – as many as 70% of the nation’s population of 25.5 million. Symptoms can advance quickly and affect a person’s mobility; the disease also carries a significant toll on mental health of those affected due to the associated social stigma.

Dr. Estelle M. Raza-Fanomezanjanahary, another co-author of the study, recognized the significant burden of LF on the patient population she was serving in the commune of Tsaratanana while working as a physician in a PIVOT-supported government health center. In pursuit of her Masters in Public Health from National Institute of Public Health (INSPC), she sought to conduct research on the potential gaps in surveillance and treatment of the disease. To complete the study, Drs. Estelle and Holy and a team of researchers from the Ministry of Health partnered with PIVOT to conduct a regional evaluation of LF transmission by conducting three types of surveys in four government districts, including Ifanadiana District, where PIVOT is working to strengthen the public health system.

“This study is important because its results are necessary benchmarks for all stakeholders – the WHO, Madagascar’s Ministry of Health of Madagascar, and other partners – in the adjustment of strategies to fight against lymphatic filariasis,” says Dr. Estelle.

While many infected with LF are asymptomatic, all who go untreated can contribute to its transmission, with mosquitoes spreading the parasite from infected individuals to healthy populations regardless of symptoms. For this reason, the MDA approach is considered the key strategy of the global LF elimination program – administering drugs widely means treating whole communities in which any number of individuals may be unaware that they’re carrying the parasite. 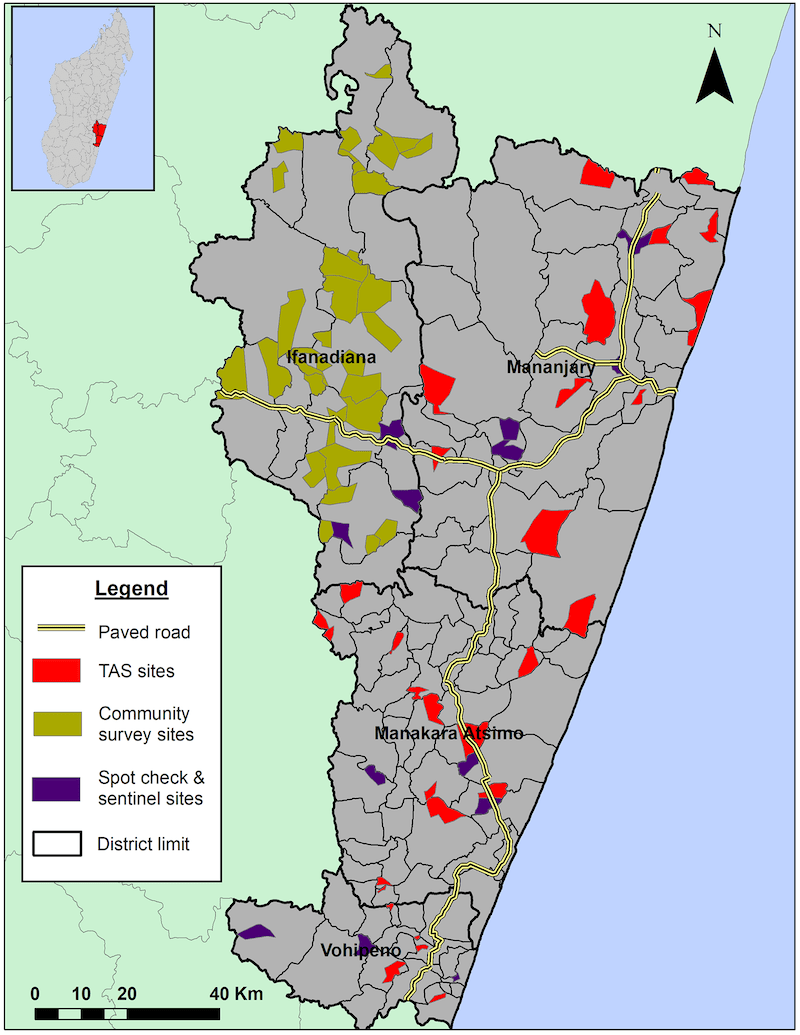 However, the standard for monitoring and interpreting data around prevalence is limited. Using the international-standard school-based transmission assessment survey (TAS), the investigators’ results showed enough of a decline in prevalence to warrant stopping MDA treatment in three of the four districts surveilled. The results of two other community-based types of surveys conducted, however, revealed that the adult population still had high LF prevalence levels. This raises questions about the international guidelines for treatment and surveillance of LF in places like Madagascar, where both are focused on school age children.

“The WHO has clear guidelines for the monitoring and evaluation of LF programs,” says Garchitorena. “However, they overlook the fact that, when community health systems are weak and underfunded, breakdowns can happen at every level, including successful delivery of drugs. Our study shows that this may actually bias current evaluation methods that determine whether MDA programs are focusing their efforts in the right areas.”

We believe these insights will lead not only to improved disease surveillance and treatment of LF in the region, but also to the improvement of international guidelines for fighting LF beyond Madagascar. The PIVOT team is pleased to have collaborated with Dr. Holy, Dr. Estelle, the Ministry of Health, and other actors to support the global fight against lymphatic filariasis.