As the world faces a global measles outbreak, even countries with high rates of vaccine coverage have not been spared from an uptick in cases. Though a cause for concern anywhere, the emergence of three cases of measles in the United States or Europe does not often evoke crisis. But when the same number present themselves in Madagascar, exactly as they did this past October, the fragile state of the health system means the situation can escalate to a widespread emergency much more quickly.

According to the UN, the ongoing outbreak in Madagascar has infected over 66,000 and claimed the lives of at least 922 individuals to date – a magnitude that the country has not seen in decades.

In many ways, the story of Madagascar’s measles outbreak is familiar. With a weakened public health system and one of the world’s highest poverty rates, the country’s largely rural population is highly vulnerable to epidemics, including diseases such as plague that have been reduced or eliminated by countries with stronger health systems.

Currently, however, measles outbreaks are cropping up around the globe, capturing international attention due to the threat they pose to communities in such unexpected places as the United States, among others. In some areas, the uptick in cases is a result of a movement among people who opt against having their children vaccinated despite the relative ease and affordability of doing so.

By contrast, Madagascar’s government and partners, including PIVOT, are in urgent need of vaccines – the only measure proven effective against measles. The outbreak has been fueled by a nationwide shortage of these life-saving immunizations.

“This is an alarming situation,” says PIVOT National Director Dr. Ali Ouenzar. “Preventive measures must be accelerated to stop the spread of the epidemic.”

In Ifanadiana District, PIVOT has been working with the Ministry of Health (MoH) to ensure the necessary supplies are rapidly available to address all measles cases, providing treatment kits to all health centers in the district, and training clinicians in case management for measles. So far, 105 cases have been reported in the district with 0 resulting deaths. Alongside the MoH, we have made strides over the past 5 years to achieve a 73% vaccination rate in areas we support – compared to 58% nationally. 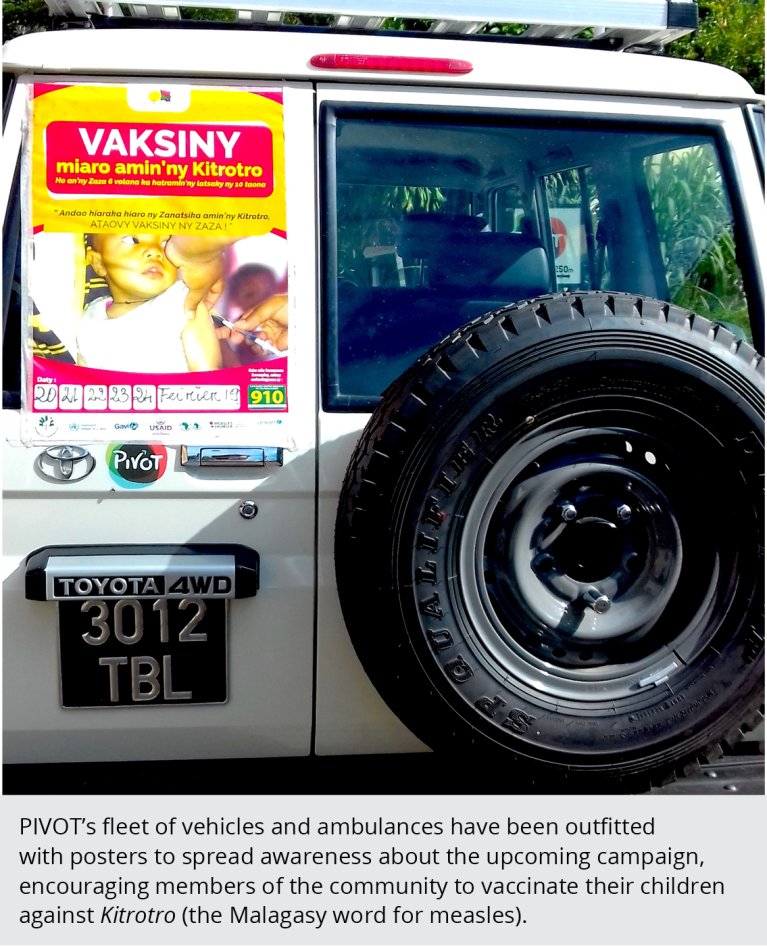 But 73% is still a long way from the 95% vaccination rate required for a community to be considered “immune” to measles, according to the CDC. To achieve this, PIVOT and the MoH are launching a week-long campaign against measles throughout Ifanadiana District with the explicit goal of vaccinating at least 95% of those most susceptible to contracting measles: children between the ages of 6 months and 9 years. With roughly half of children in Madagascar at increased risk of illness due to malnutrition, this age group comprises the majority of the rising death toll nationwide.

Alongside our MoH partners and the 120 campaign staff PIVOT is financing to mobilize the effort, we anticipate immunizing 65,000 children over the course of the next 7 days, and sensitizing all communities across the population of 209,000. Teams will go by motorbike and on foot, crossing rivers and climbing hills to reach families and children in every corner of the District that is roughly the size of Delaware.

Without guaranteed vaccines, strong supply chains, or facilities adequately staffed with trained personnel, an end to Madagascar’s ongoing measles crisis is difficult to foresee. This outbreak, so closely following the pneumonic plague epidemic that occurred roughly a year ago, is reinforcing the importance of PIVOT’s mission to ensure a public health system that is strong, resilient, and accessible – the key to containing outbreaks and preventing them from happening in the future.