This fall, Madagascar faced the worst outbreak of bubonic and pneumonic plague that the nation has seen in decades. While Madagascar’s “plague season” doesn’t technically end until April 2018, the decline in reported cases has led the Ministry of Health to declare the crisis over. Schools in the capital city of Antananarivo have reopened, checkpoints that were set up at regional borders to screen travelers for symptoms have been taken down, and Madagascar is showing up less often in alarming global headlines. 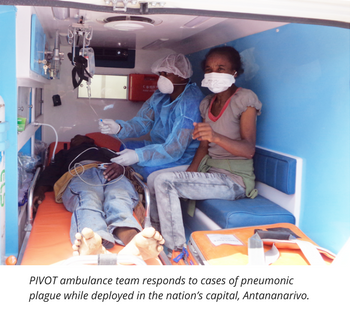 Due to a number of confluent variables, this year’s epidemic spread faster than the public health system was prepared to handle. Of the 2,200+ suspected cases reported, over 200 lives were ultimately lost to the disease, which is generally treatable with common antibiotics, but almost always fatal when left untreated.

During the outbreak, PIVOT’s teams were deployed to the furthest reaches of Ifanadiana District to provide health workers with protective equipment and supplies necessary to combat the outbreak. Working in step with the Ministry of Health, our clinicians traveled with district health officials to speak with communities about the disease, what to do if they were experiencing symptoms, and how to avoid transmission. PIVOT enacted a strategy that was both preventative and responsive, traveling to communes with suspected cases, and isolating and treating symptomatic patients, their families, and any exposed contacts. 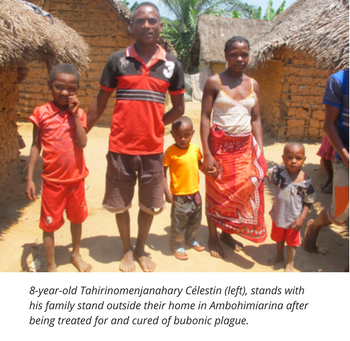 In Ifanadiana District, we saw only 1 death among the 30 plague cases that were reported; that person died before she could seek help. The fact that Ifanadiana District’s mortality rate was less than a third that of the rest of the country is a strong indicator of the progress PIVOT and our Ministry partners have made in strengthening the district health system. It provides evidence that a strong, functioning health system is the key to preventing plague and other epidemics such as Ebola and Zika.

A longstanding myth of global health is that providing quality healthcare for all people is an all but  insurmountable challenge due to the overwhelming complexity of health systems, and of social and environmental determinants of disease.

However, we at PIVOT know the solution to ensuring universal access to care, and it so happens to also be the solution to preventing the next epidemic: strengthening health systems.

We are grateful to those who have supported our work in the face of crisis. As PIVOT continues to strive toward the vision a model health system for Madagascar, we proceed with confidence that Ifanadiana District’s health system is becoming resilient enough to face future crises, and even strong enough to prevent them from happening at all.