20 Feb Field Note: Between This Cyclone And The Next 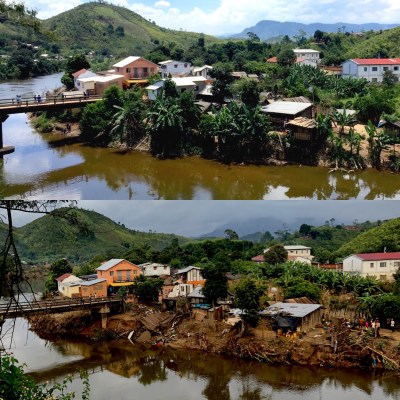 As the mayor of Ambohimanga du Sud gave us a tour of through the village center, he pointed to the top of a two-story building to indicate the level to which the water had risen during Cyclone Ava, which had passed through a few days earlier. In a matter of hours, this storm had left more than 1,500 people displaced in the immediate area, ruining most of their current food supply and belongings, and destroying almost 75% of rice fields. In addition to the food insecurity the community is already facing, the crop loss guarantees an uptick in malnutrition rates in this area come harvest season.

Fortunately, Ambohimanga du Sud is the commune where PIVOT is focusing its geographic expansion in 2018.

As PIVOT social worker Zo and I walked through town to speak with members of the community about their challenges post-cyclone, we met Jean de Dieu Rabesahala. We learned that his family’s home and rice crops had been among those destroyed, effectively eliminating their livelihood, and that they had no choice but to pay rent for temporary lodging. As it started to rain, Jean de Dieu welcomed us into the 10×10 room that his family of six adults and one infant now share. Inside, the home was aglow with the light of a small charcoal fire that cooked the family’s dinner while they told us emphatically about how quickly their actual home had been destroyed by the floods.

During the cyclone, they sought shelter at a nearby church which soon also flooded, forcing them to find a third place for shelter, and then a fourth, and then fifth. Their flight to safety had been slowed and complicated by the fact that they had a 2-week old infant among them, Christin, and that his mother Lucie (Jean de Dieu’s daughter) suffers from elephantiasis, a condition that has swollen her legs, making it extremely painful to walk.

Despite the seeming insurmountability of new challenges created by the cyclone, Jean de Dieu’s priority, he told us, was still to find treatment for Lucie’s condition.

A snapshot of the Rabesahala family’s situation illustrates at once the cascade of challenges that Ifanadiana District’s population collectively faces: their livelihood depends highly on their natural environment; natural disasters such as cyclones are inevitable threats to their health, safety, and livelihood; social factors contribute to lack of access to preventive measures, leaving them vulnerable to vector-borne illnesses (such as filariasis, from which elephantiasis develops); their geographic location impedes their ability to access care; the facilities they have been able to reach (for a price) require them to leave other commitments behind, and are not guaranteed to be staffed, equipped, or supplied to treat them; and, once there, they are unlikely to have the means to pay for whatever treatment is available.

While expansion to Ambohimanga du Sud was already solidified as part of PIVOT’s 2018 plan, this visit allowed me to witness it crystallize in real-time as an urgent organizational priority in the eyes of our leaders, giving me genuine hope for the families in need that we met.

Over the past three years, we’ve seen the impact PIVOT’s work has had on the communities where we are already working – now those same services will arrive in Ambohimanga du Sud, and it will make a true difference to tens of thousands of people. The next time a cyclone passes through the village, there will be no question about whether the health center will be equipped to handle related injuries, or provide the necessary medication for resulting illnesses. No member of this community will have to travel long distances to find a health facility void of necessary medicines, nor will they have to choose between buying those medicines and providing food for their families.

As we began saying “veloma” and “misaotra” (goodbye and thank you) to the Rabesahala family, customarily shaking hands with each one, Jean de Dieu paused with my hand in his and said “I am happy you came to see my family, but there are so many other families who need help here. Please come back soon.”

I was heartened to be able to say with confidence that we would.