On the evening of March 26, 2018, a taxi-brousse was driving between the towns of Ranomafana and Andriamamovoka on a stretch of road known to be narrow and windy. In trying to avoid collision with a large oncoming vehicle, the driver swerved and lost control, sending the vehicle and its 21 passengers off of the road and into the adjacent ravine, falling 40 meters. Tragically, three people died on impact.

Following the crash, PIVOT’s ambulance team was called to the scene of the accident to provide necessary aid to the passengers affected. The team arrived within minutes, immediately assessing the needs of those who had been injured, providing essential care on the scene, and carefully transferring injured survivors up the steep mountainside into ambulance vehicles to be transported to district health facilities.

Seventeen people were transported to the district hospital in need of urgent care. The four most serious cases were then transferred by the PIVOT team from the District Hospital to University Hospital of Fianarantsoa (CHU).

Anita, 28, was among the survivors most severely wounded due to the accident, having suffered significant head trauma among other injuries. Thanks to the rapid response of PIVOT’s medical evacuation team, she was able to receive care at the District Hospital, where clinicians efficiently assessed her need for a higher level of care and ordered her transfer to the CHU.

After two weeks of receiving treatment at the hospital, Anita made a full recovery and was discharged with a plan for follow-up care. In expressing his gratitude to the PIVOT ambulance team, Anita’s husband said that “without PIVOT, a lot of life would have been lost in this accident.”

The PIVOT reference team has been serving the population of Ifanadiana District since 2014, and their swift response to this tragic event indisputably saved lives. Their efficient response work combined PIVOT’s commitment to removing financial barriers to care meant there was no delay in providing all victims with every component of care deemed necessary for their survival.

Traffic accidents will forever be a threat to human health around the world, but this tragedy demonstrates that saving lives in the face of crises such as these is possible if a functional system for emergency response and referral is in place with links to higher levels of care. 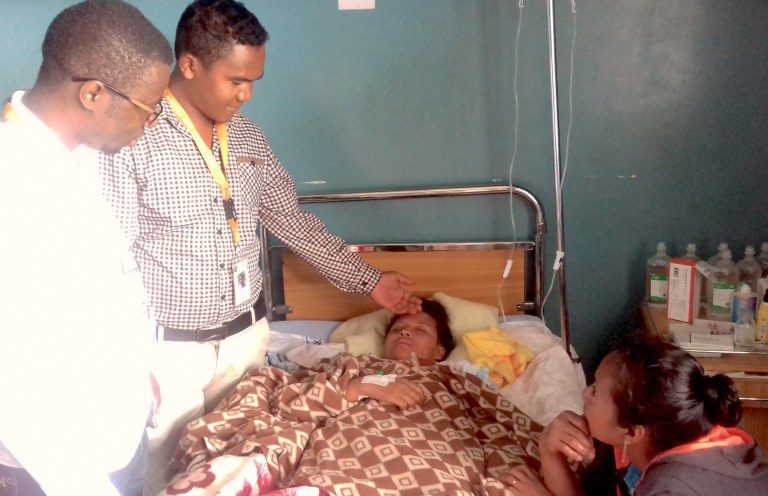 Dr. David, manager of quality of care, and Luc, manager of the referral team, visit Anita at the University Hospital during her recovery.